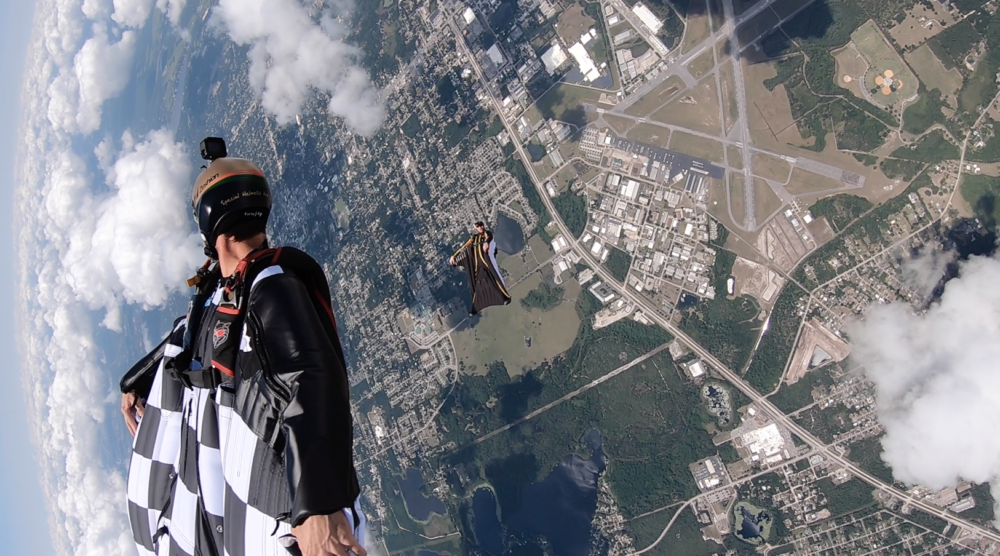 Summer wingsuit flying in Florida has another dimension during this time of the year. Due to the clouds and the fantastic weather that surrounds these long incredible days.

Wingsuit flying is a very modern and technical discipline in skydiving, and the suit enables the pilot to travel long distances while reducing their decent rate drastically. It also allows the flyer to stay in the air between 3-5 minutes before opening their parachutes.

Mankind has always pursued the dream of flight, developing all types of airplanes and flying machines. However, wingsuits truly let humans fly free, and without the use of an engine, in all, they become their very own aircraft.

The jump is a 3-way formation executing a shuffle, this a maneuver where each of the flyers changes slots from a belly attitude position to back flying position while crossing and flying around each other.

Wingsuit flying is the sport of flying through the air using a wingsuit which adds surface area to the human body to enable a significant increase in lift. The modern wingsuit, first developed in the late 1990s, creates a surface area with fabric between the legs and under the arms.

The wingsuit flier wears parachute equipment specially designed for skydiving or BASE jumping. While the parachute flight is reasonable, the canopy pilot typically unzips arm wings (after deployment) to be able to reach the steering parachute toggles and control the descent path.

Edit your profile or check this video to know more