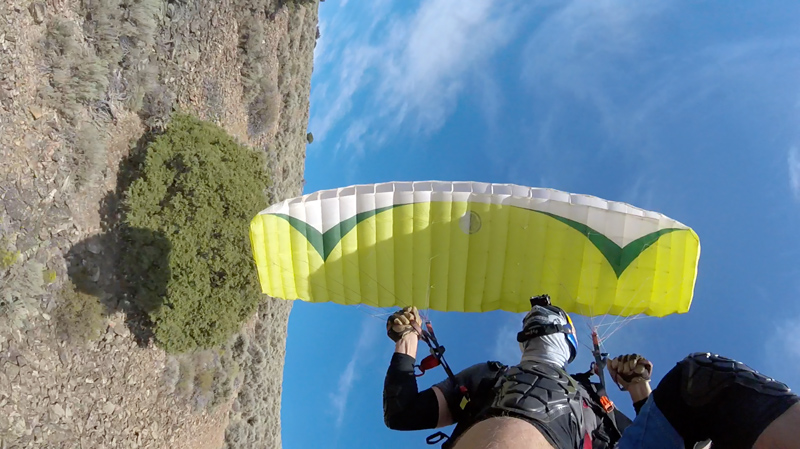 Speed flying or skydiving, this featured video shows an amazing experience during this production with the PD Factory Team into the Soboba mountain in California, unreal location, great team, aerial stunts performed by Jonathan Tagle and Francisco Neri.

However, parachuting or skydiving is done from a plane or fixed object (BASE jumping), and the wing is designed to arrest the free fall. Newer designs of hybrid-wings (also called mini-wings) are now being produced to allow a high speed “hike and fly” from mountainous areas. They can be soared in strong laminar winds and thermals similar to paragliders, and may also be trimmed for a more traditional speed flying descent.

In the late 1970s, French mountaineers began launching parachutes from steep mountains on foot (ground launching)[3] and with skis. Modifications to these parachutes evolved into larger, easier to launch wings now called paragliders, and parachute ground launching remained largely forgotten. However, advances in material and parachute swooping events inspired a new generation of pilots in France and America about 20 years later.

Foot-launched parachute slalom course competitions known as Blade Running (or Runner) competitions started in the Western United States in 1996 and continue with the Blade Raid since 2005. An American team of stunt parachutists expanded the sport, making stunt videos skimming mountain slopes in the Alps from 2001 to 2002. One team member opened the first ‘Ground Launching School’ for foot-launched parachutes in 2004 in California, USA

Edit your profile or check this video to know more